How To Pray When You Feel Overwhelmed 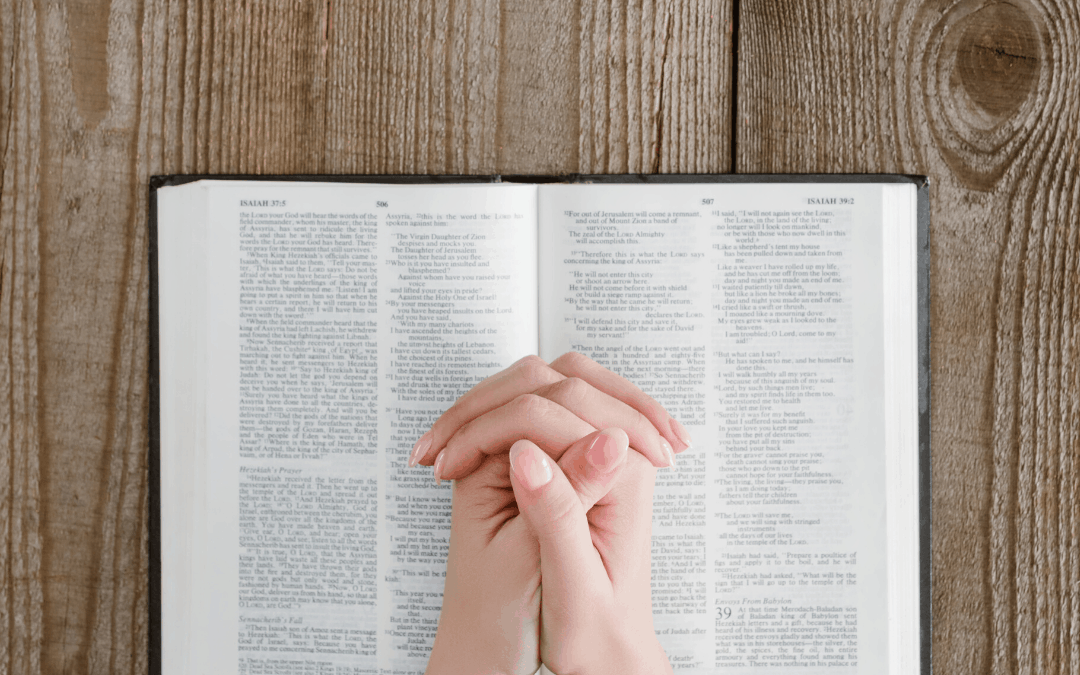 Life can be so hard. For the Jesus loving person, it is so assuring to know that we can come to the Lord with all of our issues. Yet still. sometimes when we are overwhelmed with life problems, praying is much easier said than done.

How many times have you been up to your eyeballs with stress, then went to pray and you draw a blank? It’s as if the overwhelm of what may be happening in your life renders you speechless. Maybe the amount of figurative guts you need to spill to Jesus is just so much that it’s hard to vocalize. No wonder so many people have a hard time praying when life gets hard!

I have found in my life when I was the most overwhelmed, it was actually harder to pray. I know it was the thing I needed to do, but it was difficult to get out of my head and focus on the Lord. Of course, it was simple to pray when things were going great, but when I needed to pray the most, I found it to be the hardest to do.

But to hear what God wants to say to us in our stressed-out moments, we have to get out of our heads. I know that sounds way easier said than done, so I’ve given you a few examples of how you can pray when you’re overwhelmed.

Don’t try to be fancy

Lots of Christians get bent out of shape about the vocabulary of prayer. Some Christians get lost in trying to make their prayer sound good that they end up not praying at all. Others have been taught one form of prayer and they get stuck in the routine. When you’re overwhelmed, it can be so easy to draw a blank when you go to pray. Tripping up over your vocabulary doesn’t help at all

There are so many ways to pray in the Bible. There are prayers of supplication, intercession, thanksgiving, song prayers, meditation, and so many more! So many people in the Bible form their prayers in many different ways that it can be hard to figure out which way is the best.

I think God gives us so many examples and ways to pray because He wants to show us that prayer can look like whatever you need it to look like at that moment.

Take Hannah in the Bible for example (the story can be found in 1 Samuel 1. If you’re not familiar with the story, let me give you a quick rundown.

So she decided to go to the temple on her own and pray. The Bible says she wept inconsolably, and she spoke under her breath so nobody could hear her. She prayed relentlessly, and begged God for a son. She swore that if she had a son, she would give him over to the Lord service.

Her prayer was not fancy whatsoever! The high priest saw her praying and thought she was drunk! There was no special form to her prayer at all, yet God heard her all the same. Hannah did end up having a son, Samuel, who ended up being the high priest who anointed David as king of Israel.

Hannah didn’t care that she sounded strange. She needed to talk to God about her situation, so she just did it! Don’t worry about saying all the right things, just do it!

Find something to thank God for

Praise does something amazing to our spirits. It takes our overwhelming situation and puts it into a bigger perspective. Praise takes the emphasis off of what’s making us overwhelmed and turns it into what is right with God.

Imagine it is like you get invited to a friends house. You pull up in the driveway, knock on the door, and as soon as you enter their house you complain about traffic was terrible and their house smells bad! Do you think that person is going to appreciate you entering their home with a really bad attitude? More importantly, how would you feel after arriving at a friends house and immediately being in a crabby mood?

I’m not saying God is going to turn you off if you do that. He will still listen to you and love you the same. God doesn’t change because you went right to the bad when you prayed. He’s still going to welcome you with open arms, but you may not be as appreciative of those arms when you’re still upset.

Now change the story above, and instead of entering the house in a crabby mood, you start to compliment how beautiful their home is, or how dinner smells amazing. Your friend still loves you and is happy to see you, but you’re the one who’s happier in return.

Praise doesn’t make God listen to you better, it makes you put your life in His perspective.

Instead of making the immediate focus of your prayers being your overwhelm, try making praise the first thing you do. This can help put those overwhelming things in your life in perspective, and it helps remind you that God is ultimately still in control of your life.

Related: 5 Minute Self Care for the Christian Woman

Prayer is simply having a conversation with God. The thing about conversations is that both people in the conversation need to talk! But sometimes when we pray, we tend to get one-sided. We spend so much time talking that we don’t spend enough time in silence.

One of my favorite examples of God talking to people quietly is a moment in the Bible when God talks to Elijah in 1 Kings 19.

Elijah at the time was being antagonized by the queen, Jezebel. She was threatening him relentlessly. So he did what anyone would do who was afraid for their life, he ran away! He hid in the desert, and struggled with some very dark thoughts. Simply put, Elijah was overwhelmed. He did a lot of spilling his emotions to God, and God told him in 1 Kings 19:11 to go stand on a mountain. Here’s what the rest of the passage says:

God did a whole lot of outlandish things to get his attention, but in the end he spoke quietly. I think God was trying to get Elijah to just be quiet and listen! There was absolutely nothing wrong with Elijah pouring out his emotions to God, but he spent so much time dwelling in the bad that he didn’t give God time to respond.

It’d be just like trying to have a conversation with a friend, and you’re the only one who talks. It’s not really a conversation if only one person speaks. God wants to give you a solution to your overwhelming situation, but we have to be quiet long enough to hear.

So take some time after you say what you have to say and just be quiet. Just listen. You may not hear anything the first time, or the second time, but even silence with the Lord in it can bring you the peace you need.

Use Jesus as your example

Jesus was incredibly overwhelmed at the end of his life. Honestly, the word “overwhelmed” doesn’t quite cover what Jesus was experiencing during the time of the Passover when He knew His life was coming to an end.

In Matthew 26:36, Jesus goes to Gethsemane to pray a final prayer before being arrested and ultimately crucified. He knew what was going to happen. Jesus already had The Last Supper with his disciples, Judas had already betrayed him, and Jesus was heading to pray even though he knew he was walking into a trap.

Ummm…I’m pretty sure that is the definition of an overwhelming situation!

The way Jesus prayed while he was in Gethsemane is an incredible example of how we should pray when we are in overwhelming situations. It’s incredible because it’s NOT fancy by any means, and it gives a heart-wrenching glimpse into just how difficult it was for Jesus to give himself up to death.

When Jesus was asking for the “cup” to be passed from him, he was essentially asking God if there could be another way. The inevitability of death was overwhelming Jesus, and he just wanted it to go away. He was being honest with God!

But after he spilled his honesty to God, he says “you will be done.” At the end of the day, Jesus knew God was in control, and that what was happening was for the salvation of humanity. Therefore, enduring the current situation would be well worth it for what the future held.

So how does that relate to us? Jesus shows us that it’s ok to be honest with the Lord about how we feel. He wants to know our stresses, even if they’re pretty ugly to share. Jesus looked pretty rough crying tears of blood, but God was there with him to bring comfort.

And ultimately that comfort that God brought Jesus was reminding him that God was still in control of the situation. Jesus acknowledged and rested in the fact that though things were terrible, God would make something amazing out of it.

At the end of the day, all Jesus wants is for you to talk to Him.

Jesus showed us through his prayer at Gethsemane that he totally understands how it feels to be overwhelmed. He has walked in your shoes, and He is fully prepared the lead you through it.

But for Jesus to lead you through your overwhelming situation, you have to be willing to be lead. That means presenting yourself to Him.

So when you’re overwhelmed, don’t fret about your prayers not sounding fancy. He just wants to hear you. Find something to be thankful for, not because God wants to have his feathers fluffed, but because it puts your life in a more positive perspective. Find time to be quiet and listen for that still small voice. I promise, God will speak peace to you in your overwhelm.

And lastly, Jesus is the prime example of praying in the middle of a trial. He shows us that it’s ok to be vulnerable, but don’t forget that God has a plan for you. Ultimately, that plan he has for you will be so much better than what you’re currently dealing with.

Don’t let overwhelm keep you from Jesus. He’s an expert at helping you in your situation.

Any cookies that may not be particularly necessary for the website to function and is used specifically to collect user personal data via analytics, ads, other embedded contents are termed as non-necessary cookies. It is mandatory to procure user consent prior to running these cookies on your website.